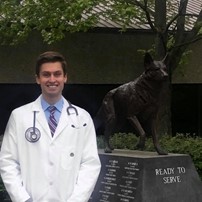 Dr. Jake Shaw grew up in the Richmond, Virginia area where he developed an interest in helping animals at an early age. During his senior year of high school, Dr. Shaw began a mentorship program at Springfield Veterinary Medicine, which solidified his commitment to veterinary medicine.

Intent on becoming a family veterinarian like his mentors, Dr. Shaw made the long trek to “gorge-ous” Ithaca for his undergraduate studies at Cornell University. Returning from upstate New York, Dr. Shaw attended the Virginia-Maryland College of Veterinary Medicine. During his time in veterinary school, he was inducted into the OTS service fraternity, which allowed him to participate in events supporting local needs in the Blacksburg community (Go Hokies!). He also received the Compassionate and Caring Award during his clinical year in veterinary school. Upon graduation, Dr. Shaw worked in private practice in Bethesda, Maryland, but he is now thrilled to be back in Richmond joining Springfield Veterinary Center!

Dr. Shaw’s devotion to veterinary medicine includes a professional interest in dentistry and pathology. Outside of the veterinary clinic, he has spent years designing a board game as a

passion project. Other interests of his include spending time with family, viniculture, bowling, and doting unlimited affection on his Bichon Frisé, Frisbee. Dr. Shaw is ecstatic to join the crew at Springfield Veterinary Center, and he greets each day as an opportunity to give back to the community in which he was raised.